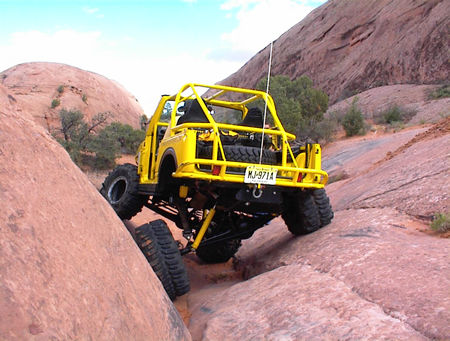 Eddie 'gettin' flexy with it' behind Hell's Revenge trail! We soon be carry the 1/4 elliptic system found on Eddies rig!

The 4th annual Zukfari was a great success this year!!!

No one got a specific head count since so many folks were down, but its estimated there were between 150-200 Suzukis down during Easter week this year. If you weren't there, you missed some great fun! Trails were run all week long with multiple organized runs on Wed and Thursday. Wednesday night was the ASA raffle where several thousand dollars in prizes were given away.... including products from such great companies as ARB, ProComp, Tuffy, and Rocky Road Outfitters. Now do you wish you had been there??? 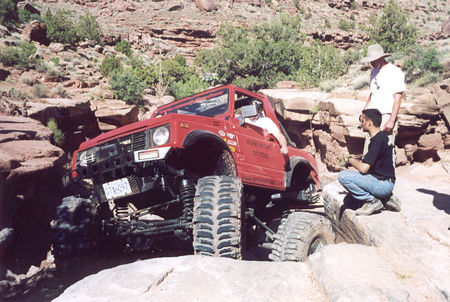 Jake Palmberg caused quite a stir this year by pulling in from Canada with his 40" Boggers and small block Chevy to pull them. Rumor has he can pop a wheelie with all that power!

Did we mention the ASA cookout? Dessert party after the prize drawing? How about the world's best trails all within a 10 mile radius of Zuki central, the Slickrock Campground?

Well, stop dreaming and be a part of the action. The ASA Zukfari runs every year the week before Easter. Make your plans for next year. Be part of the largest Suzuki event in North America. Be there.... or be hatin' it!

Take a gander at some of our favorite Zuk shots from the event below. We've fingernailed them to shorten load times. Check out some of the more extreme action that went on during Zukfari. Though keep in mind there are trails for every level including plain ole scenic trips grandma could do in her Subaru. 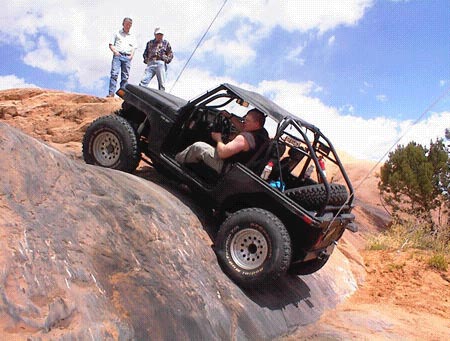 Jon Riggs, president of the ASA, in his flatfender Suzuki creation.... the Zuggy (pronounced like 'buggy'). Wheelbase which matches that of a Wrangler and 33" tires with only a couple inches of lift. Here he climbs what no other Zuk can, the Dump Bump.

If you're inclined to join up with the fun next year, make sure to free up the week before Easter. And feel free to email us with any questions you have. And don't forget we are helping organize the Sand Blast in Northern Utah on June 3-4, and the Summer's biggest Suzuki Bash.... Suzis on the Rocks! This runs August 10-13th.

Why are we so into this??? We're not only here to provide superior hardcore offroading products.... but also to fully support the Suzuki community in every way. We love to wheel as much as you do, probably more :^)

If you have any great pics from Zukfari, please send them our way: