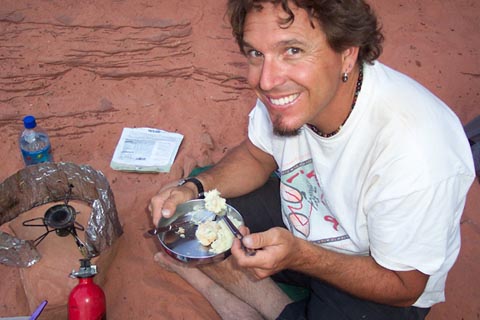 Some folks like to know who they're buying from.

Who are the main folks behind Rocky Road Outfitters?

Glenn, born in Honolulu, Hawaii, was raised on the sand and in the surf. Perhaps this is how a passion for adventure began. As a child his family moved to Southern California where he stayed until the freshman year in college. At that time he ran competitively, snow skied ferociously, traveled, and beach bum'd.

Glenn had a sound interest in the arts, yet turned down a music scholarship at the University of Utah to pursue skiing, girls... OH! and education too.During tenure as a student of the world, he spent time studying abroad in Britannia, Paris, and Switzerland as well as at home. At the time, he spoke French fairly well and is working hard on Spanish since he spends much of each winter in Mexico now.

He acknowledges he has been very fortunate and has made it a focus in life to travel extensively. This includes most of the USA and Canada, as well as Eastern and Western Europe, Central and North Africa, South Pacific, Central America, Carribbean, Asia. To date, Glenn has traveled in 51 different countries. This is one guy rarely content to sit still. Glenn is also an avid outdoor enthusiast which is how he came to discover the joys of 4wheeling.

If its fun and outside, he will do it.... or at least wants to if time ever presents itself. 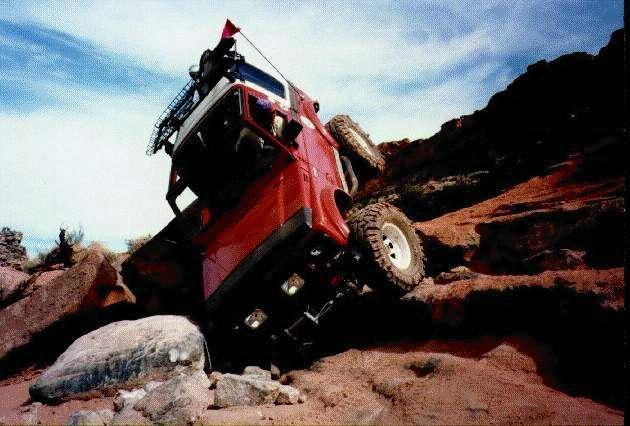 It all started on a chance 4WD excursion during a mtn bike trip to Moab in the 80's. Glenn had been up in the mountains on picnics, touring, and dates before, but no real serious stuff. The first trip on 4+ rated Hell's Revenge in a near-to-stock vehicle changed all that.

Finding parts for his Suzuki at that time was tough, but within a couple months it had lift, it had tires, gears, & more. He was addicted and had it bad. Years, dollars, and bloody knuckles later, rockcrawling is a passion. Glenn enjoys pretty much everything to do with the sport. His first rig was the TONKA, (link to original Off-road.com feature article) the red Samurai pictured on the right. Originally the license said ZUZILLA, but a TONKA plate seemed to fit the 'toy nature' of this vehicle a bit better.

It was a beauty & served him well over many years and more than 280,000 miles. Back in those days Glenn caught alot of grief for this particular rig, but these little things can go anywhere as people have since found out. Samurais have now come of age and can wheel as well as any other vehicle on the planet.

With TONKA, Glenn had a great on and off road 4 wheel drive vehicle and began going to events all across the West (Moab, South Dakota, Las Cruces, Hardcore Heaven (Johnson Valley), Rubicon, Arizona, Fordyce, you name it....). Together they conquered all the toughest trails. You may still be able to check a couple out he has written up on the 'net'.... Arizona, Rubicon, South Dakota, and Las Cruces. This vehicle was pushed to the limits and since Samurais on the trail were rare at that time, ended up getting alot of "press time" as a result.


As well as it performed, the red Suzuki had been built piecemeal. He had a dream of starting fresh with a new vehicle and doing a 'frame-up' 4x4 project. In spring of 97', Glenn was invited to participate in Four Wheeler magazine's Top Truck Challenge. He had planned on taking the whole Summer to build the new vehicle, but with Top Truck so close-by, was forced to complete it in 1 month.... and so, set out to build a new rig which was his vision of the ultimate rockcrawler (for that time). The vehicle which you may have seen in any one of many magazine articles. It is the vehicle on the 'cover' of our website, the ZUKINNI SAMURAI.


On a daily basis you will usually find Glenn driving either a '97 Cherokee, a 2002 Jeep Liberty, 2005 Toyota 4runner, 1997 TJ Wrangler, Land Rover, or a Nissan Titan Pro4x.
Though its a bit of a joke as to how many vehicles he does own. One of Glenn's main pet peeves is shops that sell parts for vehicles they know nothing about. While he can't own every vehicle on the planet (though he's trying), between owners and staff, we own and operate vehicles for most of the parts you see found throughout the Rocky Road website.


Rocky Road doesn't sell parts for every vehicle under the sun. Main reason for this is the company philosophy is that to not only be able to design and manufacture the parts, but also run them, understand them, and be able to provide actual assistance to customers for their installation or questions on the products or vehicles.


While Rocky Road could just become another huge catalog warehouse like some over-sized companies full of staff that don't even own 4x4's much less go wheeling... that's not 'how we roll'. 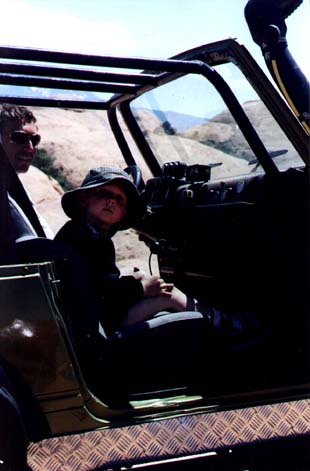 A recreational experience in a 4x4 is no less valuable than one backpacking, equestrian riding, or mountain biking. Holier-than-though attitudes about trail access and who has the right to share "your" trail are plain wrong. We all deserve the right to recreate as we wish so long as we do so responsibly. Every single recreational group in the 'outback' will continue to lose access to trails and roads to closures until the day all recreators can put aside their biases and work together to defeat environmental extremists who work toward the cause of 'trail closures' every day of their lives.

In business.... treat others as you would want to be treated yourself. With the power of the internet as it is, and our world growing smaller every day. Sometimes mistakes do happen... and not every person is reasonable in their expectations or demands, but one should always do their best in business to 'do right' in the end within reason.

Everything happens for a reason. Do not view an unfortunate incident solely on its own merit. Look beyond it and you'll may find there was a good reason for whatever happened.

"Young" is a temporary state of being. "Youth" is a state of mind you can carry with you throughout life.

We are first and foremost, recreational fanatics. After years of investing hard earned dollars into supposedly off-road capable 4wd parts and mods, and having them readily fail, we finally said ENOUGH!

Rocky Road is a company born of the philisophy that 4WD parts should be built tough enough to withstand SUBSTANTIAL trail abuse. Forget showy 'cruising' gear.... there's enough of that out there. We decided it was time to build stuff  for the trail, by the trail, and of the trail. 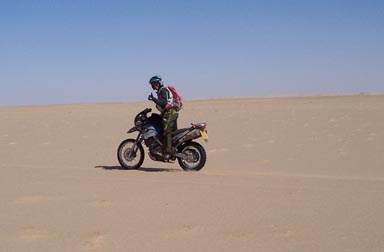 In our products, we incorporate 'interesting ideas' we have always wanted to see in products, and use only heavy grade steels in building our parts. And most importantly.... a radical concept.... HAVE IT BE AFFORDABLE as you'll notice not only with our equipment, but also with our pricing on most items!

Think you've been in the middle of nowhere before???

When you call us to place an order, you'll find folks who really own, build, and drive their own 4x4s and who can either answer questions immediately, or transfer you to someone who can. Email us and you will get the owner of the company and chief engineer. How often will that happen at other manufacturers???

We drive the vehicles we manufacture parts for and our experience really shows. While this means we may never be able to build parts for every vehicle on the dirt, it does mean we're working from personal experience. We're in this business for the passion!

Rocky Road is currently employing 22 full time staff members. We are very proud to be one of the largest employers in our small Utah community. We take pride in manufacturing all of our parts onsite. We do not outsource to inexpensive labor across borders or oceans as many of our competitors do. All Rocky Road manufactured parts are "100% Made in USA".

A few favorite thoughts... mental chewing gum if you will:

Not till we are lost, in other words, not till we have lost the world, do we begin to find ourselves.
--Henry David Thoreau

What lies behind us and what lies before us.....
Are tiny matters compared to what lies within us.
--Ralph Waldo Emerson

Earth gives life and seeks the man who walks gently upon it.
--Hopi Legend

Life is under no obligation to give us what we expect.
--Margaret Mitchel

As I went walking, I saw a sign there
On the sign it said 'No Trespassing'
But on the other side it didn't say nothin
That side was made for you and me!
--Woody Guthrie, from his song This Land Is Your Land

"Being Young" is a temporary state of being. "Youth" is something you carry with your throughout life.
--Glenn Wakefield 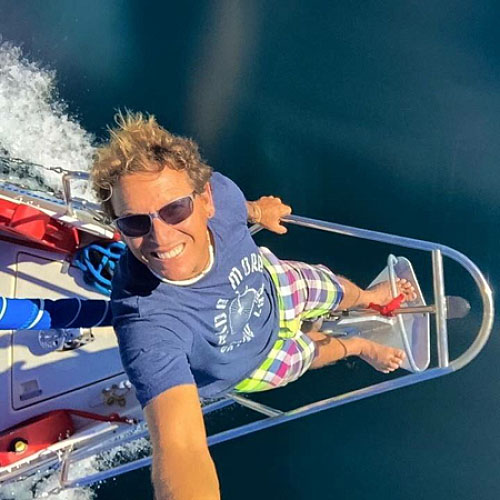 Glenn owns sailboats in both the Sea of Cortez, and the Caribbean.
Sailing, and most anything to do with the ocean is a passion he loves to share.

Rocky Road is a family owned business located in the mountains above Salt Lake City. Rocky Road is not an install shop, but we do also co-own Intermountain Vehicle Specialties, which is an installer of RRO and other offroad parts.

We'll do our best on every single order and if there is a mistake on our part, will pay to correct it.

Our parts are in greater and greater demand, while good eomployees are hard to come by in our area. If you experience a delay in your order from us.... please bear with us. Sometimes the best isn't always the fastest.

Please note that owners and our employees love to wheel our own vehicles, so if you call us on the weekend, we'll likely be out testing (playing with) our equipment... ie, we are closed weekends. We're also closed holidays.

If you ever have difficulty getting through on the phone, PLEASE send us an email. We are very quick to respond to emails and one of the very few companies to do so. We tell our staff not to rush phone calls and take the time to answer everyone's questions in detail. As a result, getting thru by telephone can be challenging during peak times. Again, email us. You will find links all over our website with email connections to feel free to use them if you have any questions.

Going for a tumble in the 'Luge' on the Martinez Canyon trail in Arizona.

PS. This canyon is much steeper than it looks.
Anyone standing in this photo would be on all fours to keep from sliding down the trough. 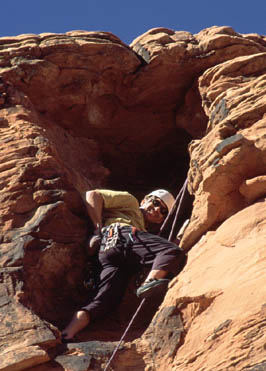