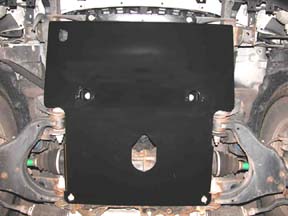 Any Toyota owner that heads offroad, has likely had that dread feeling approaching a rock or stump in the trail on whether they're going to hit or not. If you hit... if your front differential going to crack like an egg? Or will it make it until the next bump comes along? Either way, it is stress we don't need.Now you can cover up your 'Achilles Heels' with super tough 3/16" thick skid plates. With precise fitment every time and a large coverage area, this is a must have for every serious Toyota owner. Easy install and beefy as hell!

Picture is looking straight up at the Tacoma/4runner front skid plate.

Drilling is required on some kits and they all come complete with hardware and instructions. Make your vehicle bulletproof from the bottom up.

The front skid plate pictured up on the left replaces the factory sheetmetal piece and is designed so that you can reach in from the side and remove your oil filter rather than having to remove your skids for routine maintenance. It also protects your engine's oil pan. Note that the skid plate in the photo is not coated, but these skids are shipped with semi-gloss black powder coating.

The front skid plate also protects the radiator and provides plenty of clearance at the same time. The oil drain plug is also accessible through the rear opening in the skid plate. While completely protected you will be able to access it easily when you need to change your oil. Even if you don't do it yourself, the Jiffy Lube guys will love it! Also the coolant drain hole at the front of the skid plate allows you to change your coolant without removing the skid plate AND without making a mess.

On all skid plates we recessed the mounting bolt to keep them from getting damaged or sheared off. While countersunk Allen head bolts could be used, we've had problems removing them later because steel and rock end up in the hex opening. We don't want you to have those same headaches.

The picture at left also shows just how much protection you've gained for your transfer case. This is a MAJOR improvement over the stock tin part that Toyota calls a skid plate. It's a bit tough to see, but we've used carriage bolts to attach the skid plate to the transmission cross-member so there are no catch point when dragging over rocks. This skid plate is available for the 4runner or for the Tacoma.

Take a quick look under your Tacoma or 4Runner a and you won't find anything to protect your transmission or steering rack either. You might also notice just how easy it would be to get hung up on your transmission crossmember. Apparently, Toyota didn't think you'd be playing on real trails. We know you're gonna play hard which is why we have the transmission skid plate.

This skid plate which is pictured at right protects your transmission and steering rack while filling the gap between the front skid plate and the transfer case skid plate. It is made of laser cut 3/16" thick steel that is CNC folded and is powder coated semi-gloss black for a durable and attractive finish. It is mounted solidly to the truck's frame and and does NOT require any drilling. All hardware and instructions are included.

Just like our other skids this skid plate will help you get over obstacles by preventing your chassis cross-members from catching on whatever you're driving over. So you not only get added protection and peace of mind, your Toyota will be more capable as well!!

No matter what the position on your vehicle, Rocky Road has you covered and protected like no other.